This year’s Midwest Musky Classic, held in Phelps on October 3rd through 5th, was a cold and rainy one but that didn’t slow down the hardcore musky hunter participants! After only having a couple of muskies caught in last year’s tournament, this year’s classic produced 19 competing fish! (And a few Northerns and Bass, as well.) 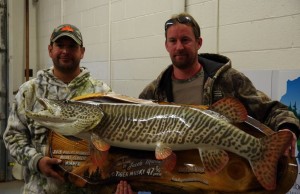 The weekend started off with warmer weather but strong winds. On Friday, fishermen battled winds up to 30 mph with the temperature hovering right around 50 degrees. Saturday was the coldest and wettest day of the tournament, with temps lowering to about 30 degrees, rain sprinkling all day, and even some snowflakes flying! Sunday saw the temps raise up to just over 40 degrees, and the wind blowing at 17 mph, with some light sprinkles in the morning.

The tournament finished with a luncheon at the Phelps Fire Hall, a fun gathering that allows time for the fishermen to brag and share stories. A wonderful lunch was served by Sunrise Lodge, and beverages donated by Dublins Sports Bar & Grill. Following a tasty meal, the winners were announced and raffle prizes drawn.

As the hardcore musky hunters gathered for the lunch, the consensus about the weekend was ‘cold and wet’. That might not sound like fun fishing conditions, but experienced anglers will tell you that, although you may not be very comfortable, the muskies bite best in just those conditions. Is this why more fish were caught this year than last? Who knows! We will chalk that up to the fishing prowess of this year’s participants!

The Midwest Musky Classic is one of the latest of the season of its kind, and one of few that do not require teams to fish together. It’s made extra special by the returning fishermen, some who have been fishing this tournament for over 20 years. Of the 103 fishermen, only 15 were first-time anglers in the Midwest Musky Classic. For one father and son, the Classic is a family tradition that the father has been coming to since the 80’s and they now enjoy together. “It’s great when we catch a fish, but it’s more about being out on the lake together”, a Musky Classic competitor explains.

The tournament includes four lakes in Phelps – Lac Vieux Desert, North Twin, South Twin and Big Sand Lake. If you are visiting Phelps soon for some fall fishing, we recommend trying your hand on Lac Vieux Desert because that’s where the most muskies were caught last weekend. 14 catches came from Lac Vieux Desert, with 3 on Big Sand Lake and 2 on North Twin. Although the majority of the muskies were caught on the first day of the fishing tournament, judges were still rushing out to measure fish right up to the last minute on Sunday!

This year’s winning muskies had some tough competition, which is not unusual for this fall tournament. Participants remembering years past said that there were many times when 1st prize was won by a single quarter inch, and the same for 2nd prize. With such a close rivalry, tournament winners deserve a big round of applause! This year’s Midwest Musky Classic winners were:

In addition to the three winning places, prizes were given for the biggest catch of the day on each of the three tournament days. Big Fish of the Day prizes were awarded to: 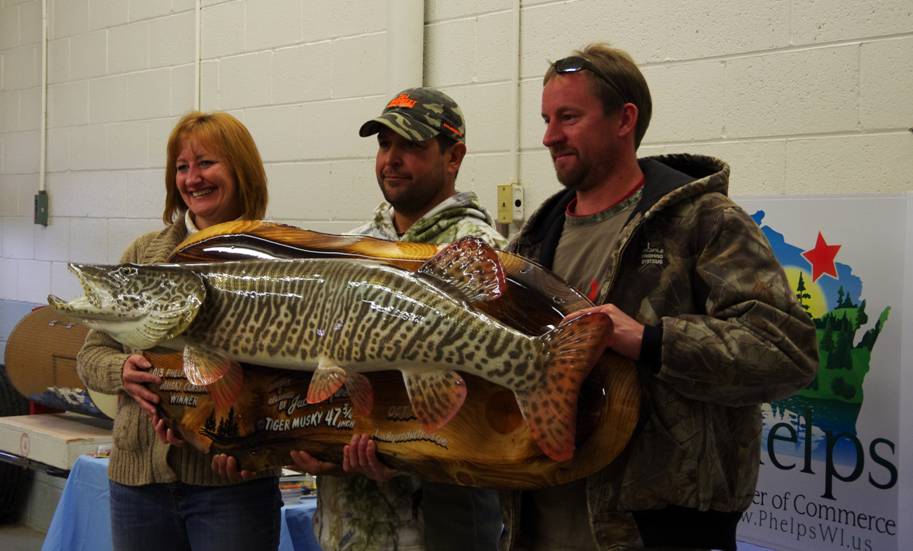 The Phelps Midwest Musky Classic is made possible by the tireless hard work of tournament volunteers, generous donations of sponsors, and the commitment of local judges. Chamber Director Sheila Schmidt spent countless hours coordinating this unique event and bringing all of the pieces together, with the much appreciated help of volunteer Don Crass. Phelps Chamber Board members (Bill Wilkinson, Mary Jackyl, Rae Ann Volkmann, and Jolyn Kyler) helped Sheila prepare for the event and pitched in on the awards luncheon on Sunday.

A big thank you goes out to Midwest Musky Classic Sponsors:

And another to the judges who braved the weather to bring us our winners:

Thank you from Phelps to all of those that make the Midwest Musky Classic happen!

Are you interested in competing in next year’s Midwest Musky Classic? You can find more information about the tournament at https://www.phelpswi.us/midwest-musky-classic-fishing-tournament. Or contact the Phelps Chamber at 715-545-3800. Want to share your stories about this year’s triumphs or those of past events? We would love to hear it here on the Phelps Chamber Blog, or find us on Facebook today!

We look forward to seeing you next year at the 35th Annual Midwest Musky Classic in Phelps Wisconsin!