Spring is upon us here in the Northwoods, and we are all looking forward to the sunny days of summer. We are also eagerly anticipating progress towards and news of the downtown revitalization efforts, and the Town Board candidates are no different! In fact, the spirit and enthusiasm of these individuals was both informative and inspiring to those in attendance. 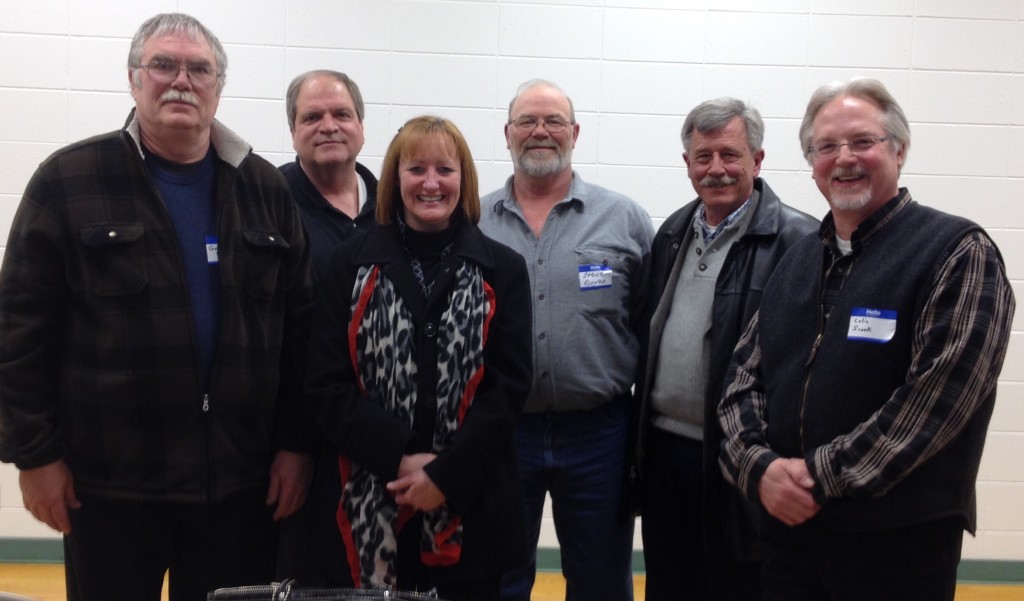 On March 25th, Phelps Community Development was kind enough to host a Meet the Candidates Forum at the Phelps School. Bob Egan, from the Vilas County Economic Development Corporation, was the gracious Forum Moderator for the evening, posing questions from the public to the candidates. Each had the chance to introduce themselves and share their experience and goals, and then would be able to answer any question posed with a two minute time limit.

A Community Uniting For Progress

Politics can be a tricky thing, and to be clear, the Phelps Chamber takes no side in this discussion and does not favor one candidate or another. However, it should be noted that this group of candidates were exceptional in their respect to one another, their quick thinking, and most of all for, their love of our community.

The topic of downtown revitalization played a big part in the evening, but one could say that the theme of the forum was community unification. Each and every candidate spoke to the importance of a town that works together, one whose residents support each other with pride, and a community in which all of the various organizations can communicate openly and collaborate towards our shared goals.

Other topics that stood out from the candidates’ answers and discussion included road improvements, the Phelps school, local employment, and the future of Phelps. Although the candidates did not, of course, agree on every issue, it was clear that whoever is elected on April 7th will be excited to do what they can for our beautiful town, and do so as a team with fellow Supervisors.

Meet the Brave People on the Stage

The town board candidates, along with the Town Clerk/Treasurer and a School Board candidate sat amicably upon the stage in the Phelps School, sharing smiles and friendly conversation. Members from the community were spread throughout the room, listening closely to the issues at hand and each response. The Forum began at 7:00 with a short introduction from each individual.

Sheri is running unopposed for her 5th term on the Phelps School Board, having began this role in 2003. She has a personal interest in seeing the school succeed as her own 3 children attend(ed) Phelps, but for her, it is about all of the students and the entire community. “I have just seen wonderful things”, she says, referring to the success of past graduating students as they move on in life.

Marjorie is also running unopposed for her position as Phelps Town Clerk/Treasurer. She has been in this position since 2010, and had previously worked in the Vilas County clerk’s office and for the University of Wisconsin Extension office. In 2014, she became a certified clerk. As a 40 year resident of Phelps, Marjorie, like all of those that sat at this table, is committed to the town and it’s residents.

Steve outlined his experience and background for the listeners, which included representing Phelps for two terms on the Vilas County Board, and working with Tourism and County Forestry amongst other groups. Steve expressed excitement over the new Vilas County trails app that they have been working on. “We are very fortunate that the town grasped us and embraced us”, he said of his moving to Phelps 19 years ago.

Colin is currently running for his 3rd term for this seat, and outlined some of what the Town Board has accomplished in those years, including the recent revitalization steps. He mentioned working with the Vilas County EDC, Nicolet College, and the Phelps School on an entrepreneurship program for the students. On the topic of the revitalization of Phelps, he said “we have made significant in-roads and got the snowball running”, encouraging the town to keep up the momentum.

Wally introduced himself to those present, and explained that his background is in science, agriculture, and research. He has been a full-time resident of Phelps since 2005, and joined the Town Board in 2013, driven by his belief that the “the town really needed some redevelopment”. Wally talked about developing Fact Sheets with the town board – “The purpose of which is so that we as a Board could stop wasting time arguing about facts and instead argue about politics”, he said with a chuckle.

Sheila, born in Waukesha, Wisconsin, moved to Phelps two years ago, after visiting frequently for years with her husband. Sheila shared that she received an MBA in Public Administration, and has been involved with the Town of Phelps Parks Commission and Maple Syrup Fest. She spoke up for local employment, saying “I would really like to see a livable wage for residents and youth”, and stated her belief that this could happen with the right approach.

Steve has been a resident of Phelps for 35 years, on the volunteer Fire Department for 33 years, and the chief of that department for more than 2 decades. He mentioned working with SonicNet for more internet coverage for Phelps, as well as working on local roads. “I really have a strong passion for this town, I love it”, he said of Phelps. He reminded everyone in closing that “We’re going to fail sometimes but we have to keep trying”.

Gene moved to Phelps in 1998 and was pleased that the towns people accepted him warmly right from the start. He previously served four years on the Phelps Town Board, and is a past Phelps EMT. Additionally, he has worked with Community Development and is involved with the Fire Tower Committee. Gene expressed his great passion for the town, and his belief that, as a leader, he can help Phelps take the next steps. 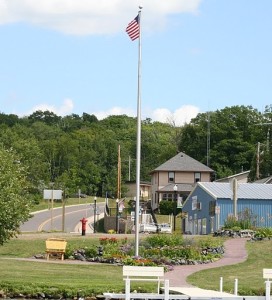 The evening continued after introductions with Moderator Bob Egan posing questions to the candidates that had been previously submitted by the audience and local residents. Seven questions were asked, with most being answered by each Town Board candidate. For those that couldn’t attend, here is a sampling of the questions and a summary of the responses. (Please note that the responses are not complete or word for word, nor are the questions. We would encourage anyone interested in learning a candidate’s full position on any issue to contact the candidate directly.)

What is your long range plan for Phelps for two years?

Colin: The main focus is the reconstruction of downtown

Gene: Roads are a main issue, and repairs need to be shared out over time

Steve W.: Revitalization is important, and continuing to work with the Vilas County EDC

Sheila: Would like to be instrumental in attracting businesses

Wally: Road development is in the works, trail plans, and maintaining property value

With a well-established park system, should the trails commission be some part of Parks Commission?

Steve D.: Maybe not one unit, but should have interaction because trails will make Phelps a destination

Steve W.: Not necessarily as one group, but communication needs to come out about everything

Sheila: Not necessarily combined, but the two do need to coordinate

Wally: Need to remember that trails are run by volunteers that should be recognized

What do you think of using funds from tax payers to develop private business and how to determine which to help?

Wally: Don’t support this in general, raises issue of tax funded entities that can sometimes compete against private businesses

Colin: There are models of towns in which this worked for specifically needed services

Steve D.: There are creative ways to support businesses, like with tax incentives or short term borrowing programs

Sheila: We should help these businesses figure it out for themselves, provide resources

Steve W.: Only if it would make sense for the taxpayers

What is your position on road maintenance cost, weight limits being raised or individuals being allowed through?

Wally: Need to maintain roads economically, but special circumstances like propane deliver have to get done

Colin: Some businesses want to run heavier trucks, there are a lot of variables on soil and roads that should be considered

Steve D.: Roads need to be multi-purpose to benefit local businesses and the public and there are ways to do that

Steve W.: Better off to repair roads a little slower, but do it right the first time with the facts needed

Gene: Should be careful to not give one business the advantage over another

Sheila: Use expert information to make sure we don’t have to repair them again too soon

Specifically, what would you do to keep Phelps moving forward?

Steve D.: Pull everyone together to get along and work together

Gene: Bringing everyone together. Would encourage all candidates to stay involved, no matter election results

Sheila: Bring new business in and encourage all community organizations

Note: At this time, it was shared that it is projected that current redevelopment plans will lead to 25 full-time jobs and 35 part-time jobs, for a $712,000 increase in local wages.

Sheri: the School is here and available for the town and is excited for the future of Phelps

In Closing, Encouraging Words to Residents

As the evening wrapped up, several of the candidates took a moment to persuade local residents to get involved with their town, and noted that there is practically no limit in ways to do so. Steve Doyan said, “Let’s move forward and let’s get this going together.” Colin Snook agreed, and announced that, as investor Carl Ruedebusch has now purchased Pine Park behind the Big Store, “we have all the space we need to make it happen.”

Gene McClasin agreed, saying “I assure you that I will help bring the community together and will treat everyone with respect.” Steve Waier followed up by stating “I am always open to questions, comments and suggestions, just give me a call. And please do get involved.” Wally Beversdorf finished by encouraging voters to vote for both him and Sheila Schmidt to bring in new blood, and by thanking the audience and the town for his current term.

No matter which candidates have your support, we should be proud to live in a town with individuals like these who are devoted to our community and brave enough to put themselves right in the center of it’s existence. You can debate the positions and topics as much as you want, but take a moment to appreciate the unity that the candidates are displaying. Phelps is an exciting place to be right now, and it’s safe to say that we are all on the edge of our seats!

Sign Up for the Phelps Chamber Newsletter for More News From Phelps!