Organizers of the Northwoods BLIZZARD BLAST hosted their Sponsor Appreciation Party at Lanny’s Fireside on March 21st. Chilly Charlie & Blizzard Belle, mascots of the event, presented a check for $25,000 to area Fire & EMS Departments. Event Chairman Lanny Studdard awarded one third of the proceeds to representatives of Conover, Land O’Lakes and Phelps Fire & EMS Departments. The Northwoods BLIZZARD BLAST has raised $85,000 to date.

In other presentations at the party, Studdard thanked all the volunteers on the Planning and Event Committees and the many student and community volunteers who came out to help on the sunny winter day. He then awarded the 2018 Northwoods Blizzard Blast Volunteer of the Year trophy to volunteer Celeste Hendrickson, who managed the recruiting and schedule coordination of over 60 volunteers. All volunteer’s names were entered in a raffle prize drawing for a gift basket won by Event Leader, Adam Hickson.

Studdard also presented a $100 prize to Dan Swiecichowski, co-owner of Sand Lake Pub in Phelps. The tavern won 1st Place in the sales contest held in conjunction with promotion of the Northwoods BLIZZARD BLAST Coupon Book. Sand Lake Pub donated their winning funds back to support next year’s event.

In closing, Studdard thanked the generous sponsors for their contributions toward the 2018 Northwoods BLIZZARD BLAST. He further stated “Once again, the northwoods communities have shown that although the towns are small, the hearts are big. With the tremendous support and generosity of our neighbors, we continue to grow as a winter destination for everyone from near and far.”

The not-for-profit organization’s mission statement is to CREATE an annual winter festival, CELEBRATE all that the season has to offer in our area, and CONNECT our COMMUNITIES through an economic, social and tourism event for the benefit of all in our northwoods. 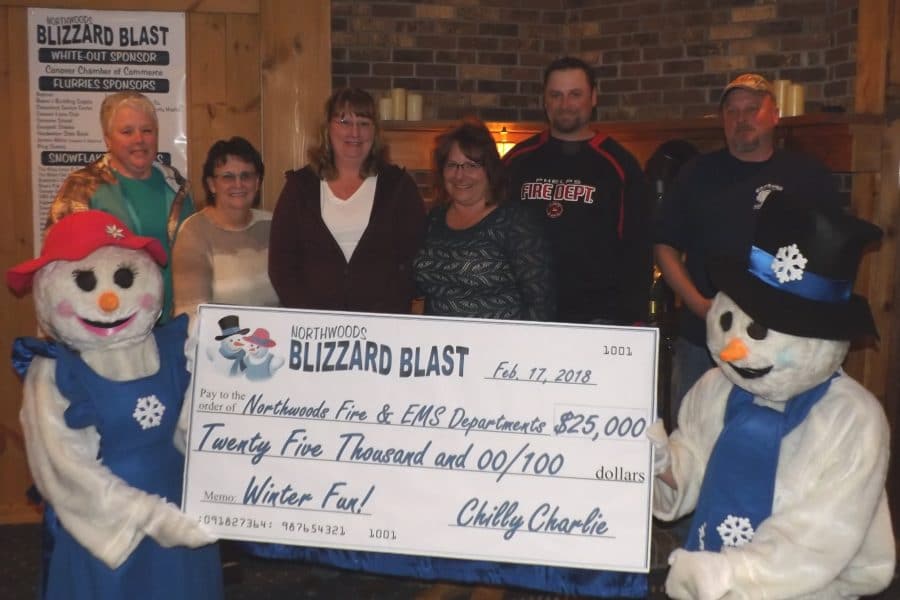