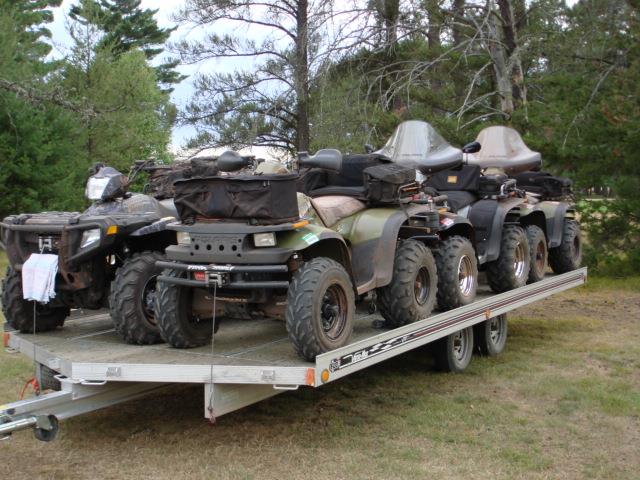 The Landover ATV Club will be hosting a ribbon cutting ceremony and group ATV ride this Saturday in celebration of the newly opened ATV trails in Phelps. The ceremony will begin at 10:00 a.m. at Wavering Park in Phelps, with the inaugural ride from Phelps into Lincoln County to follow. After the club ride, which should take about 2 hours, there will be a cook-out in the park at 2:00 p.m. for any others that wish to join in the celebration and support the Landover Club.

The Landover ATV Club has been working for over a decade to gain ATV trail access in the Phelps area, and is happy to announce that their first step in that mission has been accomplished. The county road ATV access for Highway A was approved on August 26th by the Vilas County Board of Commissioners, and the trails officially opened on September 24th, 2014. In addition to the approved route on the pavement of Hwy A, the following Phelps township roads are open to ATV use:

The snowmobile trail between Deerskin Road and Hwy 17 is also open to ATVs to access the Phelps Convenience Store. The route is open from May 1st to October 31st, between the hours of 7:00 a.m. and 10:00 p.m.. For those that wish to park and ride, Northern Exposure Bar & Grill will be the temporary trail head for Phelps.

The club is excited for ATV users to be able to enjoy the sport here in Phelps, as well as the potential that it has to help support local businesses. Other nearby towns that have ATV trail access demonstrate that riders bring in additional revenue to the area, to the benefit of small business owners and the local economy. Landover Club representatives hope to continue to make strides for ATV access, with a goal of connecting Land O’Lakes, Conover, Eagle River and Lincoln to the Phelps route, which is the first of its kind in Vilas County.

This non-profit organization is made up of roughly 120 members, from the area and throughout Wisconsin that support the development of ATV trails and recreational riding. Individuals can join for a $10 membership fee per year, which helps to cover the cost of signage for the trails. Club ambassadors are being trained to educate other riders about rules regarding trail use, as well as providing route direction and assistance on the trails. The club also hopes to offer ATV safety classes in the future.

And the weather this weekend will be perfect for an autumn ATV ride, with expected temperatures of around 50 degrees and sunshine. The club is hoping for a great turnout for this first club ride and fundraiser, which will be attended by Representative Rob Swearingen and other county officials. To learn more about the Landover ATV Club or the ribbon-cutting in Phelps this weekend, visit the club online or email LetsRide@LandoverATV.com. And follow along on Facebook to keep up on Vilas County ATV news.