You may have heard the words ‘pickleball’, and mentally associated the word with a ball of pickled cucumber or some such tasty snack. Pickleball is actually a fairly new sport that is quickly growing in popularity around the country, and Pickleball Mania reached Phelps this past October! Curious? So are we!

What in the World is Pickleball?

So what is pickleball? Well, it’s basically the combination of badminton, tennis and table tennis, with a little original spice. Like its parent sports, pickleball is played with a paddle, a ball and a net on an indoor or outdoor court. It can be played as a team sport, or singles, and actually now has a national organization to protect it, the USA Pickleball Association.

You may be thinking, but why call it pickleball? There are several theories about the origin of the name. It may have been named for the inventors dog, who loved to chase the plastic ball or for the similarity to a pickle boat, whose crew is made up of leftovers from other boats. That makes sense, as pickleball equipment was originally chosen with the bits and pieces of incomplete sports sets, whatever was on hand to alleviate some boredom one Saturday afternoon. 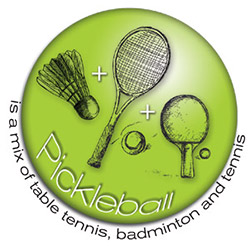 This addictive game started in a backyard near Seattle, Washington in 1965. A few dads, Joel
Pritchard and Bill Bell, were looking for a way to occupy the kids, and invented a game that the whole family would be able to play together. They got neighbor Barney McCallum involved, and created a set of rules for the imaginative game.

By 1972, the USAPA was formed, and 1976 marked the first Pickleball tournament in the U.S., held in Tukwila, Washington. By 1990, the sport was being played around the nation, with courts in each state. As the mania has now reached Wisconsin, interested players can now find pickleball courts around Vilas County. The Three Lakes pickleball court is open 24-7, and two of the area schools are even teaching the sport!

How to Play Pickleball 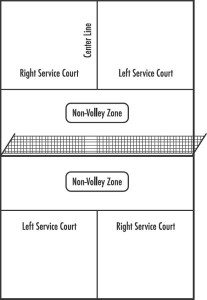 One of the draws of pickleball is that all ages can play, and it easier on the body than tennis while still allowing for a good workout. The game is played on a court 20 feet by 44 feet, smaller than a tennis court. The net sits at 34 inches in the middle, a couple of inches higher at the sidelines. As the sport has continued to grow, you no longer need to ransack old sports equipment but can now buy pickleball specific equipment.

The paddle is in between the sizes of a tennis racquet and ping pong paddle, in the shape of a square and made with a rigid material. A pickleball is quite like a wiffleball, and is slower when hit than a tennis ball. It’s made of a plastic material, about 3 inches in diameter, with a holey surface. So a paddle and a ball – you must just have to hit the pickleball with the paddle, right? Wrong!

The following is an introduction to the basic rules of the sport – please visit www.usapa.org for a full listing or rules and more information about pickleball.

Still having a hard time understanding the game? The best way to really grasp it is to go watch a match for yourself!

A Sport Rises in the Northwoods

The USAPA takes a fun and silly view of this entertaining new game, describing players as suffering from a disease. The organization describes the symptoms of pickleball mania in three stages, with no available cure. The only way to avoid the ‘disease’ is to stay away from pickleball courts and pickleball players. “Pickleball is a highly contagious, progressive and incurable disease…While rarely fatal, the disease has enormous impact on the lives of infected individuals and society as a whole” warns the USAPA website. 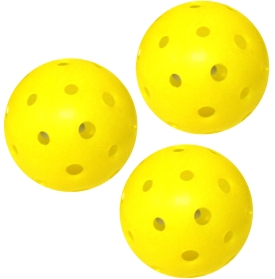 Well, consider Phelps infected with pickleball mania! Interested players can now join the craze at the Phelps School on Wednesdays from 9 a.m. to 11 a.m.. Local residents are enjoying the physical activity of the game, along with the social nature and pleasant competitions amongst neighbors and friends. Players can also find the game in Eagle River at Riverview Park on Tuesdays, Thursdays, and Saturdays from 8.30 a.m. to 11:30 a.m., when the weather allows.

Phelps may be a small town, but there is ALWAYS something to entertain or provide a little bit of amusement and fun. Softball all summer long, great local events for each season, and all the outdoor activities you could ever want. Add pickleball into the mix, and you might have a hard time picking your favorite activity in Phelps!