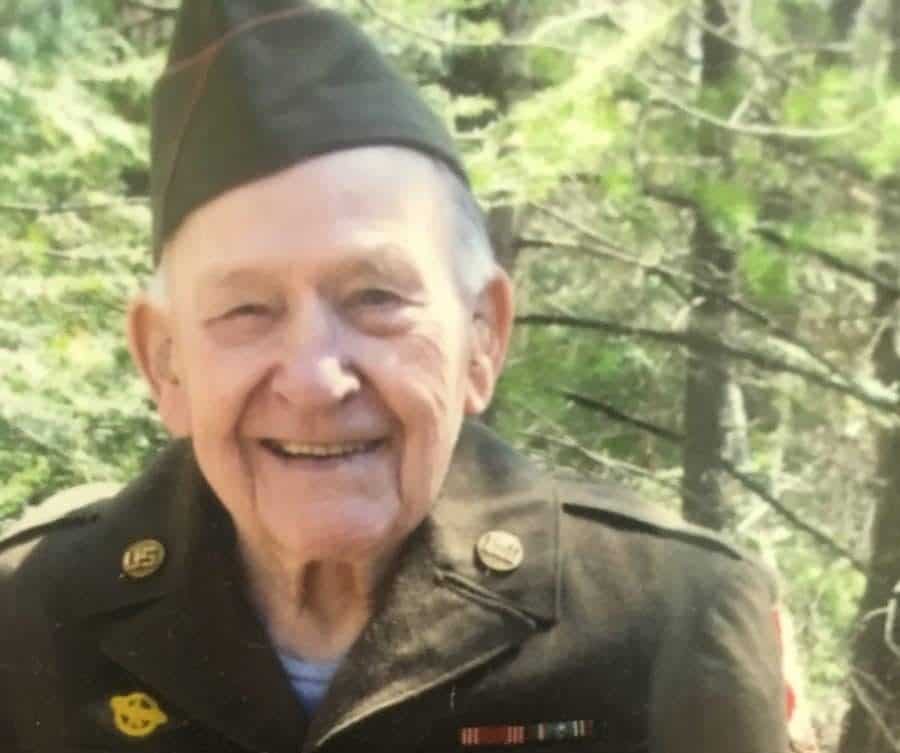 This year’s 4th of July parade in Phelps will be led by World War II veteran Leonard Alinen.

Leonard was born in Phelps to a Finnish farming family on what is now Master’s Hand Farm in February of 1920. Growing up in the 20’s, he experienced the challenges of life before electricity and modern luxuries, along with his 7 brothers and sisters. He attended school in Phelps, and it was his class that named the sports teams the Phelps Knights. Through school, he played basketball and won several trophies.

Leonard shared the fun stories of his youth, including climbing the Phelps fire tower, camping in the Blackjack Springs wilderness for days, and skiing to school in the winters. When he got older, he went to work at the Hazen Resort on Long Lake. “If you absolutely have to work before breakfast…eat breakfast first”, he said laughing, explaining this as a favorite quote of Charlie Hazen’s and later his own.

In May of 1942, and after being employed for a time in Ohio, Leonard volunteered to join the military. His skill set landed him in an engineer outfit tasked with bridge building after 3 short months of infantry training in Louisiana. For the next 3 1/2 years, Leonard traveled through England, Scotland, and Ireland with a regiment of approx. 2000.

He describes sleeping on the deck of the ship on the way to England, and how his regiment narrowly avoiding a bombing on Christmas Day. When the ‘old boys’ were sent home, many at the ripe age of 26, there were only about 700 left in his unit.

After returning to Ohio, Leonard met and married Helen Esther and had 3 daughters. After traveling the country and the world, retirement brought Leonard and his family back to Phelps.

Despite the many challenges life threw at Leonard and the ones he jumped in front of, this is a man with a quick sense of humor and a big smile. He generously shared many wonderful stories of Phelps, as well as his war experiences. Phelps is honored to have Mr. Leonard Alinen lead the 2016 4th of July parade.